IN the white moonlight, where the willow waves,
He halfway gallops among the graves—
A tiny ghost in the gloom and gleam,
Content to dwell where the dead men dream,

But wary still!
For they plot him ill;
For the graveyard rabbit hath a charm
(May God defend us!) to shield from harm.

Over the shimmering slabs he goes—
Every grave in the dark he knows;
But his nest is hidden from human eye
Where headstones broken on old graves lie.

Wary still!
For they plot him ill;
For the graveyard rabbit, though sceptics scoff,
Charmeth the witch and the wizard off!

The black man creeps, when the night is dim,
Fearful, still, on the track of him;
Or fleetly follows the way he runs,
For he heals the hurts of the conjured ones.

Wary still!
For they plot him ill;
The soul’s bewitched that would find release,—
To the graveyard rabbit go for peace!

He holds their secret—he brings a boon
Where winds moan wild in the dark o’ the moon;
And gold shall glitter and love smile sweet
To whoever shall sever his furry feet!

Wary still!
For they plot him ill;
For the graveyard rabbit hath a charm
(May God defend us!) to shield from harm. 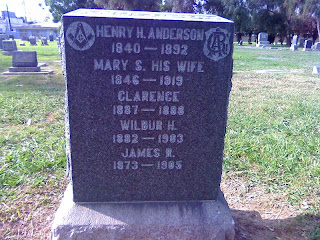 Henry Harrison Anderson died on the morning of his 52nd birthday at his home is Corona, which at the time was called South Riverside. It was January 20th, 1892. According to the obituary, “The service at the church being finished the casket was taken to the carriage and the funeral procession quietly formed and proceeded to the ten acre orange grove on Main Street owned by Mr. Anderson and there his body was deposited for the present until the new cemetery is laid out.”

The old cemetery had flooded so the people that died between cemeteries were buried wherever it was convenient. Many were reburied in the new cemetery as soon as possible. However Mr. Anderson seemed to be missing. Just before Memorial Day following his death there is a column in the paper that reads “After the services at the church the comrades will form a line and with the children and friends will proceed to the grave of Comrade Anderson and decorate it with flowers.”

From this it appears he wasn’t yet moved to the cemetery. I also could not find him anywhere else. Every time I passed the ten acre lot that he once owned I wondered if he got left there. I conjured up all sorts of scenarios. In the old handwritten log of residents at the cemetery there is one Anderson, a common name to be sure, with no first name, no death date, but the comment “removed to LA.” Could this be Henry H. Anderson? It does seem that he was moved to the cemetery and again from the cemetery.

In the course of another long search, conducted by Glen Roosevelt, who seems to always find his man, he was finally found in Los Angeles at Rosedale Cemetery along with his family. (The photo above was taken by Glen Roosevelt)

He was buried three times that I know of. In 1907 he went to his Final Resting Place.
Posted by Diane Wright at 4:56 PM

Very interesting. Your article points out that it pays to continue one's genealogy research, you never know what you'll find.